Arthur and Edward colliery gale was operated from the 1830's until it finally closed in December 1959.  The colliery was known locally as the Waterloo Pit. On the 30th of June 1949 water was noticed running from the face advancing towards old workings of East Slad Colliery.  The quick action of the underground officials ensured the men were on their way out when the inrush burst into the colliery workings flooding them.

Freeminers met to discuss matters arising during the year and elect a new comittee. ​ 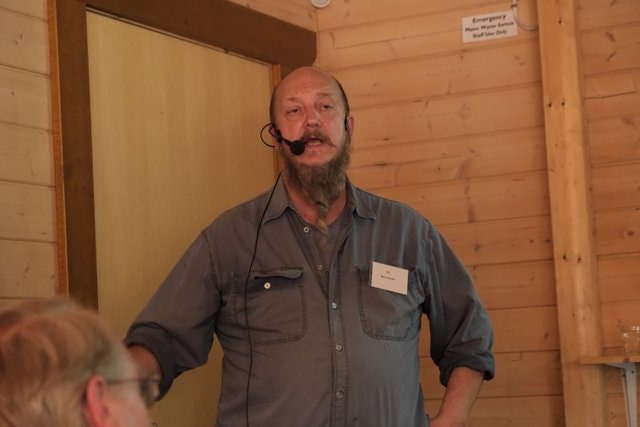 Chairman of the Freeminers' Association, Rich Daniels, delivers a talk about the Future of Freemining to the well attended Lectures of the National Association of Mining History Organisations (NAMHO 2018) Conference at Dean Field Study Centre Parkend, in June 2018.

Richard's talk discussed the position of Freemining in the Forest of Dean today and changes being implemented to increase the interest and stability of Freemining for future generations.


​Mining focussed talks, over the weekend, were wide ranging and even included a comparison of the Butty systems that operated in Pennsylvania, Durham and the Forest of Dean, presented by Dr Robert Wolensky, Professor of History, King’s College, Pennsylvania, USA. A fascinating talk was given by Roger Deeks about Arthur Clifford's pivotal role in running rescue services on the Western Front during the First World War, for which he had been awarded the Meritorious Service Medal (MSM) and his time running the Mines Rescue Service in the Forest of Dean. Freeminer Royston Pritchard gave a short description of the Proto apparatus he was trained to use, and spoke of his time training under Mr Clifford, at the Cinderford Mines Rescue Station in Dockham Road; where Clifford set up and ran the Forest of Dean Mines Rescue Service until he retired in  1959, he died at the Dilke Hospital in 1961.

​Maternity Unit in the Forest again?
​​
A bold move to restore Freemining rights to future Foresters has won unanimous support from Forest of Dean District Council.
The ongoing restructuring of health services in the Forest of Dean has led to a call for a maternity birthing room to restore freemining rights to future Forest children.
Cllr Di Martin won unanimous support at last week’s meeting of the full district council, for a motion calling on Gloucestershire Care Services and the Acute Trust to establish new birthing facilities within ‘the Hundred of St Briavels’.
This follows the ancient rights of anyone born within the Hundred to become a freeminer, a tradition that appeared to have died with the closure of the maternity unit at the Dilke in the 1980s.

Cllr Martin said: “The health services in the Forest are in a state of flux at the moment with the proposed closure of the Dilke and Lydney Hospitals and the building of a new GP surgery in Cinderford.  “So I think this is the right time to consider the re-introduction of some sort of birthing facility. “I am aware that there are not the resources for a full maternity unit but I would like to see a birthing facility or even just a birthing room supported by midwives to give local women the chance to give birth to their own little Foresters. “I know it’s a dream but maybe it’s time to push forward to reinstate foresters’ rights.”

​Maurice Bent, a Forest of Dean Verderer and former miner, saId: “This is fantastic news. It would have a huge cultural impact on the Forest and would be very popular. “It would save ... (women) having their babies at home or going into Gloucester.”

-article in the Forester 18th July 2018​​
Oakdale Colliery visit 1988.
​
A photograph from the last Mine Deputy course held at Cinderford in 1987. After the course, Freeminer Dave Tuffley arranged a memorable visit down Oakdale Colliery in 1988, the colliery was sadly closed shortly afterwards.  The colliery encountered geological problems just after investing £3,000,000 on equiping the new coal face. The colliery went out of their way to make us very welcome during the extensive underground trip and a brass Freeminers' plaque was presented to mark the visit. This photo is of some miners from that last Deputy course and a couple that came along for the trip. 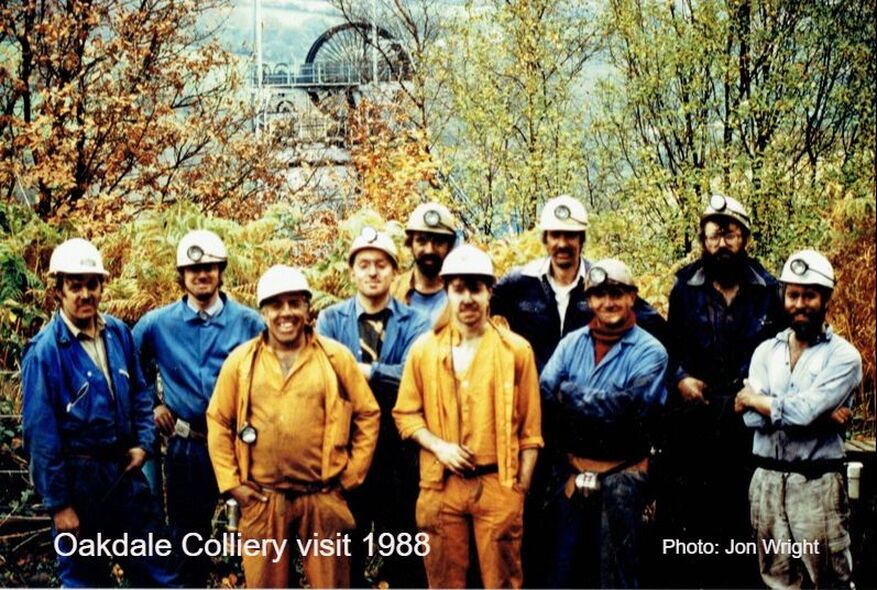