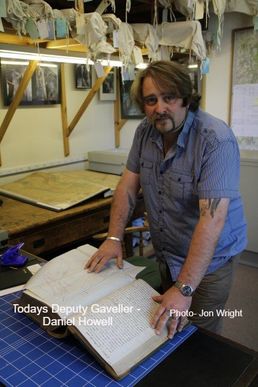 Freeminers' rights have existed from "tyme out of Minde and after in tyme." Freemining has been practised continuously from the remotest past. Today written records exist from 1244, showing Freeminers were exercising their rights to minerals in the Forest of Dean. The earliest surviving Mine Law Court documents exist from 1469 (now in the Gloucestershire Archive - PRO).

In 1612 a parchment document was produced called the ‘Dean Miners’ Lawes and Privileges’ (PRO); existing versions contain references and phrases that hint at it being a copy of an earlier Latin or French document. The existing document contains 41 laws and privileges for the winning of Myne (iron ore) and Se Cole (coal). The rights of access are outlined and the method of staking a claim, known as a ‘gale.’ The duties of the Gaveller (the King’s representative) and assistant Deputy Gavellers are outlined, these include the collection of royalties in cash or kind. It also mentions the miner's court “that is called Myne Lawe,” held at St Briavels Castle.

Royal Charter.
There are many interesting facts associated with medieval Freeminers; amongst them, undermining of castle and town walls; they fought in Farance, Scotland and Wales, they helped recapture the border town of Berwick upon Tweed several times during the 13th and 14th Centuries, as it passed between Scottish and English hands. Oral tradition, tells us that it was for services provided at Berwick that Edward I granted the Dean Miners a Royal Charter.

French Campaigns.
Freeminers fought in France amongst many campaigns throughout the Hundred Years War, they famously fought at the battles of Crecy (1346) and Agincourt (1415). Dean miners were an important part of the King’s armoury, as well as undermining, they were useful in battle, they became known as the 'King's Pyoneers,' they were used to create earthworks and undermine fortifications, as well as fighting. Coming from the Forest of Dean, the miners were also excellent archers; experts with the long bow, as well as being renowned for hardiness and ferocity in battle.

Agincourt Campaign.
During Henry V's French campaign of 1415, 120 Freeminers were taken by Sir John Greyndour, to fight in France. The miners were used at the siege of Harfleur and fought at the subsequent battle of Agincourt; only 63 were to return home. The miners helped renovate their guild church at Abenhall, nr Mitcheldean, to give thanks for their safe return. Today Abenhall church contains important Freemining emblems from that time, including the beautiful early 15thC font, showing coats of arms of prominent  families and those of the colliers and smiths who fought at the battle. Above the sealed up North doorway is a stone showing the iron miner's coat of arms, including a relief head of a determined miner wearing an archer's cap.

Shortly after their return from France, Henry V sent his brother, John Duke of Bedford (Constable of St Briavels castle and Gaveller), to present the Freeminers with a document, thanking them for their service in France and re-confirming their customs.

Freemining sailors!
In 1576 a dozen Freeminers were selected to be on board ship with one of England’s great sea captains - Martin Frobisher. They were part of a series of adventures trying to discover the elusive North-West Passage; a route around the North American continent. Although ultimately unsuccessful, they landed on an island, off what is now the Canadian coast, bringing back mineral samples, presented to the court of Queen Elizabeth I.

18th century.
Towards the end of the 18th century conflicting mining interests arose, particularly with the rapid growth of the Industrial Revolution. Entrepreneurs from Bristol and South Wales began to look for ways into Forest of Dean mines, allowing outside interests; the Mine Law Court was a major barrier. The Court became embroiled in disputes and struggled to enforce its decisions, especially as outside interests began working with some miners. Disputes culminated in 1777, with the theft of the complete Freeminers' records that had been held in a locked box at the Speech House. The Mine Law Court stopped functioning.  50 years later, the Freeminer's documents reappeared, in the hands of Crown officers and were used as evidence during a series of Crown inquisitions in the 1830’s. Some of the original documents did not reappear, including the important letter from Henry V and no Freeminers' charter is known today.  The Dean Miners’ Lawes and Privileges and Mine Law Court Orders however did re-appear, becoming the basis for the Rules and Regulations in the Acts of Parliament, which Freeminers work to today.

19th Century.
Deep coal and iron reserves could not be mined without substantial investment. So with increasing pressure from outside interests, more Freeminers began working with 'foreigners' who wanted to create larger, deeper collieries and iron mines, than had ever been attempted in the Forest of Dean.

A Royal Commission was set up in 1831 and its reports culminated with the ‘Dean Forest Mines Act 1838’. This Public Act with local effect (a hybrid Act), codifies the Freeminers’ customs and rights to minerals in the Forest of Dean. The Freemining custom became modern Parliamentary Statutes. The Second Schedule to the Award of Mines Act 1841 - Rules and Regulations for the working of Gales, gives the rules for working mines, administered by the Deputy Gaveller today.
​
20th century Freemining.
During the two World Wars, many Forest of Dean miners were recruited to join pioneer corps. In the First World war hundreds of local miners joined the 13th Battallion of the Gloucestershire Regiment also known as the 'Forest of Dean Pioneers', the 5th and 9th Battallion Glosters and the Royal Monmouthshire Regiment Royal Engineers. Miners were well used to hard physical labour, to the conditions and hardship encountered in the trenches. Miners became involved in making and repairing defences, as well as involvement in tunnelling schemes. Their work was dangerous, often working in no-mans land during the night. Although they experienced horrific losses, many miners later rejoined similar Regiments during the second World War, even though mining was a reserved occupation and the 13th Forest of Dean Pioneers had been disbanded, due to such heavy local losses.

Following the process of Coal Nationalisation in 1938, the Forest of Dean was exempted due to its unique form of ownership and history. The Coal Industry Nationalisation Act 1946 also included  specific exemptions. Some large colliery gales were subsequently purchased by the National Coal Board (NCB) but a small royalty continued to be paid by the Board, to the Freeminer Deep Gale Trustees. The last deep mine closed on Christmas Day 1965.

As large mines closed and NCB miners began looking for work, some NCB miners began their own collieries, or went to work in existing Freemines. Throughout the 1960's/70's there were over 20 collieries, usually operated by just a few men at each mine. One of the largest Freemines in more recent times was Hopewell colliery, run by the Hinton brothers and employing around a dozen miners at any time. Hopewell closed for a while in 1989, it has now become a working mining museum.

More recently, Freeminers have used their skills in projects as diverse as tunneling projects under the Severn, the Channel Tunnel, Combe Down Stone Mines stabilisation.

There are currently six small coal mines operating, one iron mine and a handful of stone quarries. Two of the freemines are open to the public.